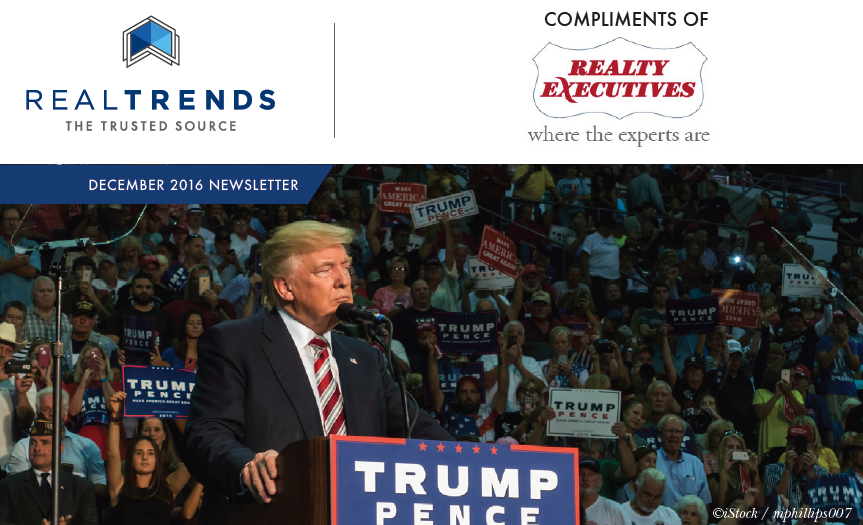 Prediction: Housing will see only a small, positive impact with the new
administration.

It’s official. Donald Trump will be the new President of the United States. He will have a Republican House and Senate with whom to work. What are some potential outcomes for
residential real estate? Likely, there will not be much of an impact on interest rates, housing tax policy or the lack of inventory. The impact may be at the margins but nothing major.
My belief is that, while there have been job gains since the recession ended in 2009, they

have been lackluster. And, the percentage of working-age Americans with jobs is still its lowest in nearly 40 years. The recorded numbers of people who are eligible for food stamps and poverty has worsened. Some of this is demographic, but much of it is due to lack of business investment.
While consumer spending has risen modestly over the past four to eight years, business investment has declined. American-based corporations are sitting on record levels of cash. Most of it is still held overseas because of the rather stupid corporate tax code in America. The Federal- and state-level regulatory apparatus have spun out of control. Even a small business like REAL Trends has been impacted by the too numerous employment and other regulatory issues. One example is the Affordable Care Act, where our health care costs have soared. I have had three health care companies cancel my health insurance three years in a row because they either left the market or went bankrupt. It needs to be fixed quickly.

"It is the Federal regulatory morass and the corrupt Federal tax code that is harming investment and job formation. The best example of this is the out-of-control Consumer Finance Protection Bureau which has no oversight and is making up the rules as they go along."

It is the Federal regulatory morass and the corrupt Federal tax code that is harming investment and job formation the most. The best example of this is the out-of-control Consumer Finance Protection Bureau which has no oversight and is making up the rules as they go along. My thought is that if our new President and the Congress fix the tax code and lessen the regulatory burden, we could see a resurgence in investment, jobs and a renewed sense of optimism in the country. And, that would certainly be a plus for the housing business.