Wanna Walk on the Moon?

Ever want to pretend you’re walking on the moon?

Every astronaut who walked on the moon has trained in Flagstaff first!

July of 2019 marked the 50th anniversary of the moon landing. Not only has every astronaut trained in Flagstaff before going into space, much of the prototype equipment was also tested here. This includes spacesuits, the lunar Rover and stereo metric cameras. And Flagstaff continues the local legacy of space exploration. NASA’s current class of astronaut candidates visited Flagstaff in fall 2019. They completed the same training as the Apollo astronauts did half a century ago. After setting foot in Flagstaff, this group could be the next to step foot on the moon…or Mars!

Local research geologists with the United States Geological Survey (USGS) Astrogeology Science Center spent a week with students collecting geologic data near SP Crater 30 miles north of Flagstaff(if you want a laugh, ask a local how SP Crater got its name!) In the past, there were other areas that were used for training, including Cinder Lake. This was created by NASA: they set off explosions to make the craters, creating a landscape with a surface similar to the moon, so astronauts could practice getting around. Much of the local geological training at that time was led by Eugene Shoemaker. Near the south pole of the Moon is the Shoemaker Crater, named in his honor!

The training the astronauts received in Flagstaff is related to geological processes: learning qualities of different rocks, and how to take field notes and collect samples. They test equipment and uncover the geologic history of the region. This will teach the future astronauts how to create geologic maps and replicate the conditions of real lunar or planetary missions. 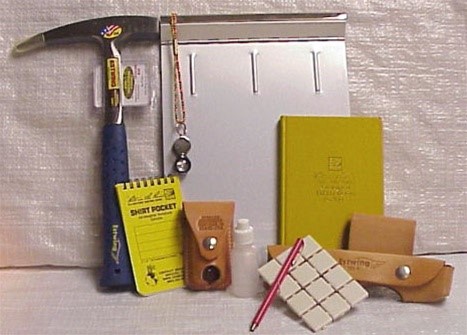 To do this, they have a geologist’s standard tools – hand lenses, field notebooks, rock hammers, GPS trackers aerial photos and topographic maps – as well as modern technology like drones and a handheld x-ray tool to analyze the composition of rocks. Drones give a great overview of the area, but do not provide the more detailed geographical data that is needed and provided by up-close observations.

If you want to experience the same landscapes astronauts have, you too can visit areas surrounding Flagstaff, including SP Crater, Sunset Crater, and even an actual Meteor Crater! These hikes are open to the public.