How Many Websites Will Feature Your Home When Listed?

Did you know, 93% of people visit websites when searching for homes.

Visiting a website and looking for the most lucrative offers available seems to be the best option for nearly all age groups. The older millennials (29-38) seem to be leading the pack again with a staggering 98% of internet-relying home buyers. Real estate industry statistics confirm predictions that the members of the so-called Silent Generation push in a different direction. While 72% of them turn to website searches, about 86% of old-timers prefer to consult with a real estate agent. Nearly half of all buyers (46%) get informed through yard signs, and slightly more than that go to open house events.

So with that said, with some help from Realty Executives, I dug up many of the websites that your home may show up on, along with Social Media sites.

Because Realty Executives is Nation and World-Wide, and have resources beyond our local Northern Arizona Association  of Realtors, the list of sites can be rather mind boggling. 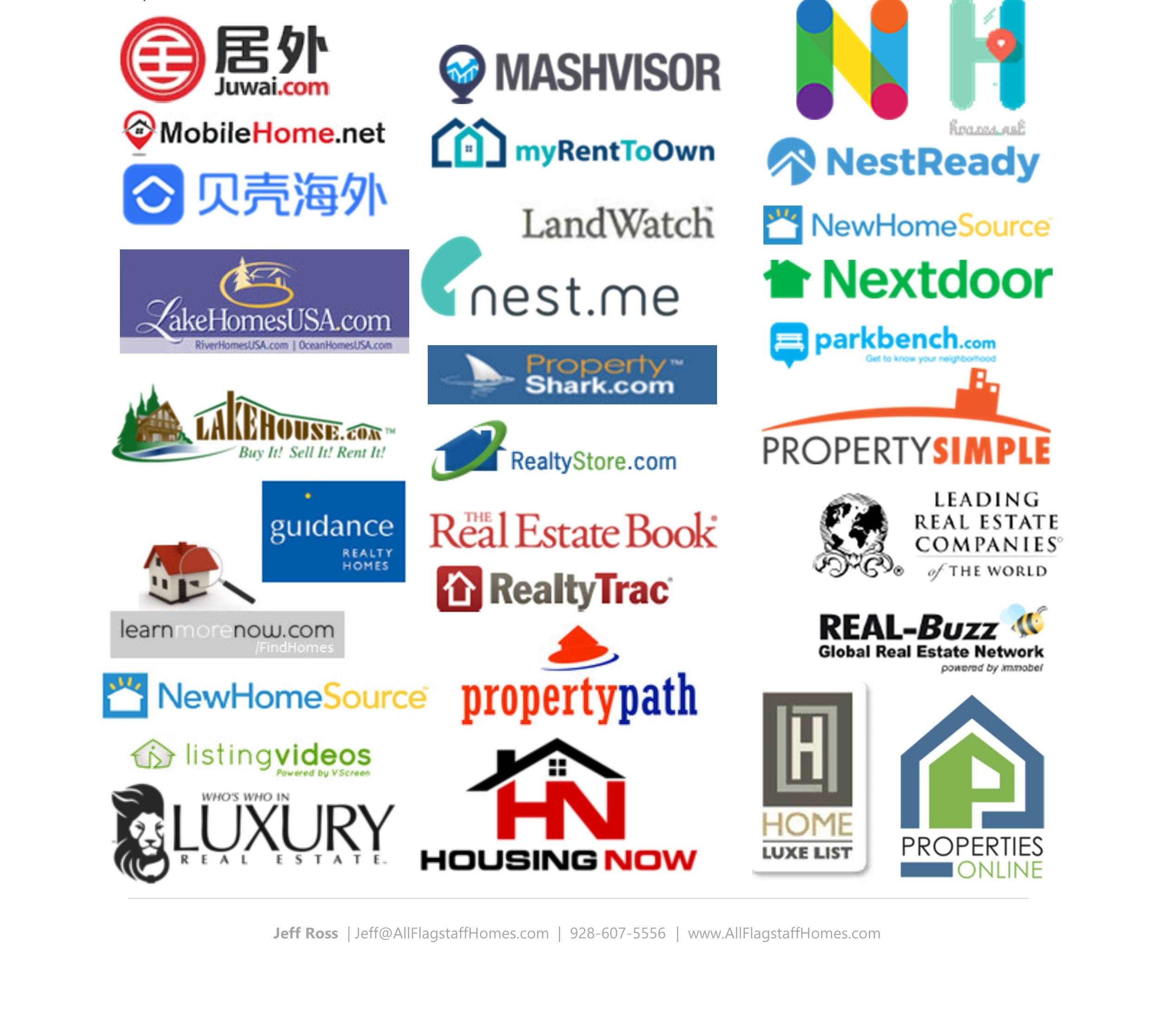 In 1972, a group of Flagstaff citizens met in the basement of the Weatherford Hotel to form a non-profit community theater. After more than a decade performing in a variety of venues throughout Flagstaff, Theatrikos finally found its permanent home in 1989. Their mission is to be a leading arts organization in northern Arizona, offering high-quality live theatrical productions and developmental opportunities, utilizing a diverse base of writing and production talent reflecting the community at large.

The TheatriKids program is open to all area youth year-round, and opportunities are provide to participate in full-scale productions as well as summer camps and workshops. Scholarships are available.

2020 has presented a unique set of challenges. However, half a dozen small theatres in Arizona and a few dozen throughout the country have, on a very limited bases, reopened.

Theatrikos implemented, tested and evaluated rigorous safety protocols with their October production of "Heisenberg." After extensive consideration, and given the successful implementation of these precautions, Theatrikos is pleased to announce that, on a very limited basis, they will also reopen starting with their Christmas show "A Tuna Christmas" running November 27 to December 20, 2020.

* 75% of seats blocked off.  So instead of 118, we will have only 32 socially distanced patrons in the audience.

* Audience wears mask at all times.  No exceptions.

* Concessions closed (so no one is tempted to slip down their mask).

* No musicals with passionately projecting singers.

* Actors stay 12’ away from first row of patrons.

Full safety protocols are available of their website: https://theatrikos.com/

"A Tuna Christmas" will also be live streamed.

Theatre lives by the adage, "The show must go on." But more important than that is the safety of our Flagstaff community. The Theatrikos board of directors, with help from their safety coordinator, will continue to monitor the safety situation at theatres around Arizona, around the country, and the health situation in Coconino county. If needed they are prepared to shut down again at a moment's notice.

Welcome back to the theatre. 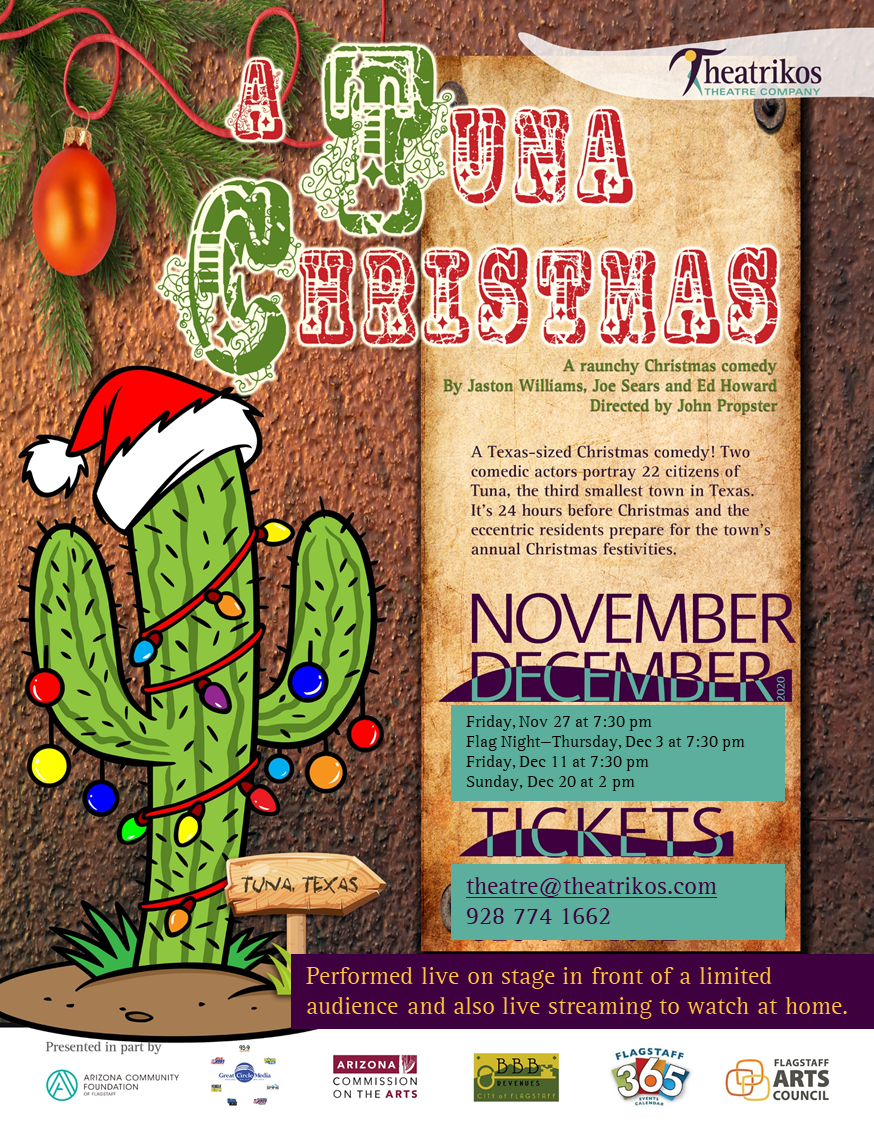 Have you ever noticed that, when it comes to real estate, there’s news, and then there's news you can actually use?

For example, most major newspapers, both print and online, publish updates on the real estate market — but only nationally and regionally. They don’t tell you what's going on in your specific here in Flagstaff, by necessity, they can only cover a broad area.

But news that's broad and general has limited value to you.

The real estate information that's most useful, especially if you're thinking of selling, is our local Flagstaff or Northern Arizona market. It’s specific to your neighborhood – maybe even to your street.

That's where I can help.

When you have questions about the Flagstaff and surround areas  real estate scene, give me a call. I can provide you with the latest information, data, and insights for your particular area. That’s news you can actually use to make better decisions about selling or buying.

This will be a little briefer than in past newsletters, mainly because the market has not change much over the past 3-4 months.
The number of homes available to purchase are down, number of homes sold are up, home prices are up and interest rates are low and stable.
So that is it in a nutshell.

A little deeper dig into the Flagstaff Market
If we look at all homes, Single Family, Townhome, Condo, and Manufactured homes.
Year to Date, thru the end of September
Sold 25.8% more homes,
Median price is at $397,542, up 10.43%
Active homes on the market is down 46%.
Currently we are sitting on 2.42 months supply of homes on the market,
which is called our Absorption Rate, the number of months it would take at our present sales rate to sell all the homes.
The experts in Real Estate feel 6 months is a happy number, any less and we are in a seller’s market, any more and we move into a buyer’s market.

You noticed an (*) next to that $498,000.
There is a very telling reason for that,
This figure includes our 3 gated communities.
Normally this would not overly effect the numbers, but this year it has.
In the 3 gated communities, Forest Highlands, Flagstaff Ranch and Pine Canyon.
Home sales have gone crazy,
Year to Date, thru October 19th
Sold 127.7% more homes, or 189 homes
Median price is at $1,025,000 or up 23.5%
These three areas account for 18% of the home sold in Flagstaff.

So, with the above said.
Taking into consideration the majority of the single-family homes sold in Flagstaff, those outside a gated community.
Year to Date, thru October 19th
Sold 21.8% more homes or 851 homes
Median price is at $440.000, up 7.4%


What Now?
If you are a Seller, and have any interest in selling your home, this may be the best opportune time.
Buyers are still out looking with few finding what they are looking for. Unless the home you are looking to sell is a second home, the challenge will be to find that replacement home.

If you are a Buyer, all is not lost, but it will take patience and a good agent staying on top of things and honestly keeping you grounded. The last thing you want to do is get caught up in the frenzy of multiple offers and any possible bidding wars that may happen

By now, you know I am here to talk, so please never hesitate to reach out. And as I have always said, it can be about Real Estate, or hiking, biking, or many other topics. Heck, ask about my up and coming passion, BikePacking….

COVID, Could it Bring Foreclosures to Flagstaff?

The Month of August was one interesting month in Real Estate, to say the least!

Interest Rates are staying low, Buyers are out in droves trying to take advantage of those rates, and Sellers have been hesitant to put their homes on the market for a number of reasons.

What were some of the reasons for fewer homes coming to the market? There may be two primary reasons, the Covid situation and the seller hesitant in allowing people in their homes, second, if they sell and downsize or even upsize, will they be able to find a home?

For the month of August for all home types, Single Family, Condo, Townhome and Manufactured.

For the month of August, we had -12.7% FEWER homes come to the market.
At the end of August, we had -38.5% fewer homes active, available to purchase on the market compared to the year before.
Our Absorption Rate, the number of months it would take at the current sales rate to sell all our current homes on the market, plummeted to 2.73 months, down from 5.2 months for August 2019.
Our Year to Date Median Sales Price for all home types is up 9.09% to $420,000.

Switching gears some,
Our Single-Family home median prices thru September 16th, 2020 are up 11.9% to $485,000.
Year to date again for single family, we have sold 25.1% more homes, while during the same time frame 4.0% fewer homes come to the market.
In  numbers, we have sold 175 more homes this year than last and 44 fewer have come to the market, a difference of 219 homes, which is a big difference and no wonder we have such a tight inventory of active homes on the market.

What do we see in the future?
That Crystal Ball is a little cloudy,
What we do know is that interest rates from recent reports may remain low for quite some time.
Buyers are out there; they have not found the homes they need today because there are so few to be had, so they will continue to look.

There is a chance that more homes may start to come to the market as sellers see the upside in selling in the current market, but it still comes down to where will they go?
Then there is the Second Home Market?
There is a possibility that those owners may decide it is time to take advantage of this hot market, especially if they have not been using their second home as much as they had hoped or family dynamics have changed.

There are lots of dynamics happening in the Real Estate market and I would enjoy speaking to you if you have any questions.
Please never hesitate to reach out, as I have said in the past, if it is not about Real Estate, there is Gardening, Hiking, Biking or Golf we can talk about. I would enjoy visiting.
Stay Safe and Healthy during these Interesting Times

When most people think of Arizona weather, they picture a hot, desert climate. Flagstaff weather is nothing like the rest of Arizona. Flagstaff enjoys all four seasons: summer, fall, winter and spring.

Summers in Flagstaff have sun, wind, and rain. There are the summer ‘monsoons’ that bring rain every afternoon for a few weeks in the middle of summer. The average daytime temperature is anywhere from 65 degrees to 80 degrees; nighttime averages range from 35 to 55 degrees. One thing to remember about summer: always have an umbrella—a sunny morning can easily turn into a rainy afternoon. The best time to visit for warm-weather activities is from mid-June to late August.

Fall is full of colorful leaves and cool, crisp days. You’ll want to wear layers (a scarf, sweater, boots), because the temperature will fluctuate as the sun rises and sets. The average daytime temperature ranges from 50 to 75 degrees; nighttime temps range from 20 to 40 degrees. It’s bit early for snow just yet; the first snow is usually around Halloween but does not stick or last very long.

Surprise! Snow, snow, and more snow. Flagstaff winter days are cold and snow filled—not what many visitors expect. Some winters are milder than others so check the weather report before making plans. The average daytime temperature ranges from 20 to 40 degrees. The average nighttime temperature ranges from 10 to 20 degrees. The coldest day of the year on average is January 4, with a low of 19°F and high of 42°F.

Spring days are a mix of everything from snow and rain, to sun and wind. You will definitely want to check the weather report before heading out. At high altitude (Flagstaff is around 7,000 feet) the sun is more intense—drink plenty of water and rest often. The average daytime temperatures range from 50 to 70 degrees; the nighttime ranges from 20 to 30 degrees.