Serving AZ & All Your Relocation Needs!

Yuma (Cocopah: Yuum) is a city in and the county seat of Yuma County,Arizona, United States. It is located in the southwestern corner of the state, and the population of the city was 93,064 at the 2010 census, up from the2000 census population of 77,515.

Yuma is the principal city of the Yuma, AZ Metropolitan Statistical Area, which consists of Yuma County. According to the United States Census Bureau, the 2014 estimated population of the Yuma MSA is 203,247, though more than 85,000 retirees make Yuma their winter residence.

Near Yuma are the Kofa Mountain Range and wildlife refuge, Martinez and Mittry Lakes, and the Algodones Dunes.

The city is the location of the Marine Corps Air Station Yuma, which conducts an annual air show and many large-scale military exercises. There is also the Yuma Proving Ground, an Army base which tests new military equipment. Yuma Proving Ground is also home to the Special Operations Free Fall School, which provides training in free fall parachute operations to Special Forces units in all branches of service, as well as those of other nations. 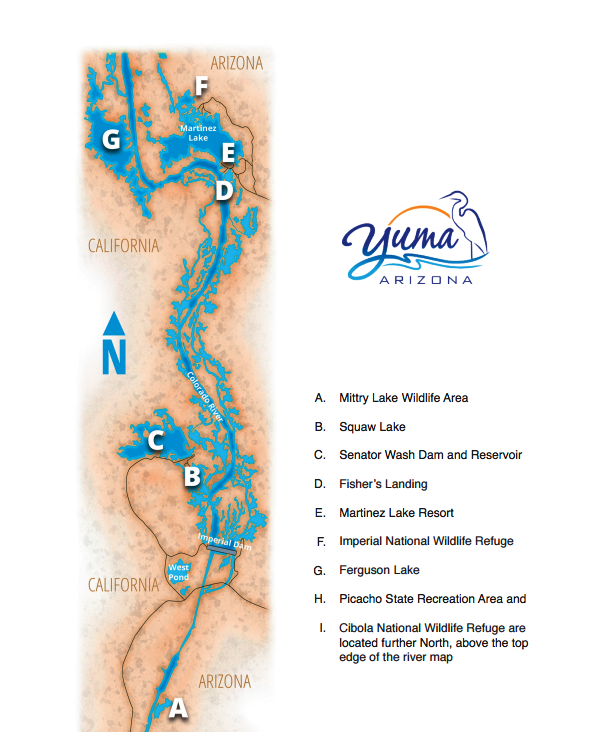 The Colorado River runs along the north and west side of town, and serves as the border between Arizona and California.

Yuma is an important station for trucking industry movement of goods between California, Arizona and Mexico. The Rialto movie theatre once owned a Kilgen pipe organ, one of the most expensive pipe organs to have been made. Originally played as accompaniment to silent films, it has been moved to the Yuma Theatre.

Every February Yumans enjoy the annual rodeo, the Yuma Jaycees Silver Spur Rodeo. A parade opens the events. Cowboys and cowgirls from all over the country compete in the festivities.

The Yuma County Fair takes place annually in the spring at the fairgrounds in Yuma.

Yuma has a minor-league-caliber ballpark, Desert Sun Stadium, which was home to the Yuma Desert Rats of the North American League and site of home games of two (previously four) teams for the Arizona Winter League. The San Diego Padres used the field as a spring training facility from 1969 until 1993.[] and a Japanese baseball team, the Yakult Swallows, used the field for spring training for 20 years. Many local club sports exist in the area as well, including the Yuma Sidewinders Rugby Football Club. The rugby team participates in the Division III Arizona Men's Rugby League, and travels throughout Arizona, California and Nevada, as well as playing home games in Yuma. 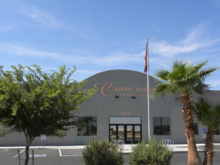 Arizona Western College is Yuma's community college serving primarily as a choice for transfer students and those with shorter career goals.

Northern Arizona University has a branch campus in Yuma, as well as University of Phoenix.

Yuma is served by the Yuma County Library District which consists of a Main Library and several branches including locations in Somerton, Wellton, Fortuna Foothills, and San Luis. A new main state of the art library is now open.

Yuma International Airport (IATA: YUM, ICAO: KNYL, FAA LID: NYL) is a joint use airport with civilian and military flight activity operated in conjunction with theU.S. Marine Corps via the Marine Corps Air Station Yuma. The airfield is located three nautical miles (6 km) south of the central business district of Yuma, a city inYuma County, Arizona, United States. It is mostly used for military aviation, but is also served by one commercial airline and one aeromedical Medevac company as well as being used for general aviation activities.

Yuma is an Amtrak station at 281 South Gila Street in Yuma, Arizona, United States. Passenger rail service is provided thrice-weekly in each direction by the Sunset Limited and the Texas Eagle over this portion of its route. The station's island platform, which is adjacent to the station building site, are accessible through a short pedestrian tunnel.

The former structure, Southern Pacific Railroad Depot (Yuma, Arizona), was built in 1926 by the Southern Pacific Railroad. After SP ceased passenger operations upon Amtrak's start in 1971, the station housed the Yuma Fine Arts Museum. The depot was listed in the National Register of Historic Places in 1976. The structure was devastated in a May 1993 fire and was razed in the summer of 1994.