Where to Spend When Remodeling 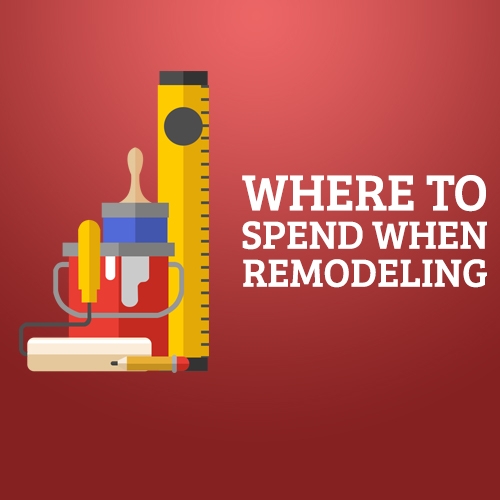 We are going to take a quick look at several of the best places that you should spend your money at. We’ll also dive into details of where and how much you can expect to recoup when you decide to place your home on the market. We’ll begin by going over some of those replacement projects and continue with an overview of some of the other big hitters: the kitchen and bathroom remodel.

These projects are relatively simple and low-cost, placing them within the reach of most homeowners. The top four improvement projects in terms of ROI are the following:

As you can see, these things are not spectacular. You should first notice where they are. They are all on the visible exterior of the home, creating a positive first impression in the minds of potential buyers, an impression that helps set the value of the home in their minds.

Other replacement projects with a good return include replacing old windows with new vinyl or wood ones and installing a new roof, with returns of over 71% and 62% respectively.

It is also worth noting that the ROI numbers will vary depending on what market you are in. The Pacific Northwest (including Alaska and Hawaii) tends to show the best return on remodeling/improvement projects, with Alabama, Kentucky, Mississippi, and Tennessee also showing strong returns according to the 2015 Cost vs. Value report from Remodeling magazine.

Naturally, there can be much to be gained from work on the inside of the home as well. One chief benefit of redoing a room or two inside the home is that it will increase your own enjoyment of your home.

Another pro is that if you are selling, it is important to carry a good impression that was formed as a result of your exterior and interior improvements of the house. As with all other aspects of home improvement, there are better and worse ways to spend your money. And as the adage goes kitchens sell houses.

Citing Remodeling magazine once again, kitchen remodels average a return of 79.3% nationwide, making it the best investment for a total remodeling project.

Other good remodel projects to consider include:

These projects can be costly, with national averages for job costs running in the tens of thousands of dollars, so be sure to carefully consider just how much you are willing to spend and what is in demand in your particular market.

One other thing to consider to add value to your home as well as make it more functional for yourself is to consider the addition of certain rooms. Clearly, in most cases this is a large step with an even larger investment involved.

Therefore, do not consider this if you are planning on selling within the next few years. That said, if you plan on staying where you are for a while to enjoy your additions, they can result in a reasonable ROI, though some are more worthwhile than others.

Take a look below.

As you can see, there is a fairly large range in your ROI involved, though not as large as a less ambitious remodel. And a careful reading of the data actually shows that some of the most expensive projects (a sunroom addition averaged over $72,000 nationwide) actually provide the lowest returns.

The simple fact is that buyers may not have the same taste as you, and even if they do, they only see the finished product with little understanding, or interest, of what went into creating it. That last point brings out the need for having a slightly deeper understanding of the way these statistics often play out in real life. For example, a roof replacement is often cited as having a high ROI.

While this can be true, it is important to understand this in context. After all, you have heard others asserting that a new roof doesn’t really add value to a home. How to square these seemingly contradictory statements?

A roof is much like a bass player in a rock band, you should only really notice it when it isn’t doing its job. That is, a roof isn’t something you should really need to think about unless it is leaking or has a colony of moss growing on it. Therefore, a bad roof can certainly detract from a home’s value.

A solid, trouble-free roof is simply expected. Its chief value as a seller is how it may favorably compare with other, similar homes with older roofs that are showing clear signs of wear.

Keeping this in mind, don’t replace your roof with an eye toward selling unless your home clearly needs it. One caveat to include is that things like energy efficient, architectural shingles with a transferable warranty may be highly attractive to the right buyer.

Also, more money does not necessarily mean a bigger return. Going back to the kitchen example, a relatively minor remodel of $20,000 yields a much higher ROI than a $55,000 remodel.

While buyers certainly love a large kitchen complete with island and shiny stainless-steel appliances, they won’t be as quick to assign significant value to the best hinges, custom stained cupboards and imported Wolf appliances that money can buy.

At some point, things like very high-end appliances can even be a turn off either because the buyer is unfamiliar with them or because he is and knows how hard it is to get parts when they fail. Basements are also tricky. A nice big recreation room is certainly a draw but often it will not be counted as living space in an appraisal or in the square footage when the home is listed.

People also tend to have their own ideas of exactly what a rec room should be. If you have not finished your basement already or are planning on leaving in less than five years, it is best to either leave it alone or just put up walls along the outside of the basement, and put in a cheap but decent looking carpet and inexpensive drop ceiling, allowing the buyer to customize to his own tastes.

It is also important to never forget the basic systems. When people are looking at a home, they do not expect to find leaky pipes, a furnace that doesn’t work or electrical outlets that pop a breaker as soon as something is plugged in.

These and issues like mold, the aforementioned leaky roof or stained and damaged carpet are things that will generally turn off a buyer, regardless of how amazing the kitchen and bathrooms may be. Some of these, especially less visible issues like an aging furnace or water heater may seem like a waste of money if you are planning on selling soon.

And indeed, a buyer may not notice such issues on the initial walk through. But even if an offer is made and accepted, that is not necessarily the end of the story. Appraisers and inspectors will both almost certainly be coming through the home as part of the process and either of these can derail a sale. An appraiser will notice such aging equipment and other factors like old carpet and flooring and adjust the home’s value based on the current market.

Home inspectors are less concerned with market value but they will point out that even if it is running flawlessly at the moment, a 25-year-old furnace can give out anytime, leading a buyer to want to subtract the value of a new one from the price of the home. So, even if you are intending to move in the near future, it is worth to pay the extra money to fix or repair the basic systems of your home. Certain systems do provide a good ROI.

The furnace and air conditioning units in particular can be a selling point if they are the new, energy efficient models. An additional bonus here is that there are often tax credits associated with them, lessening your initial investment. And don’t forget, even if any of these repairs do not add additional value in the eyes of a buyer, they don’t subtract value and will aid the fast sale of your home.